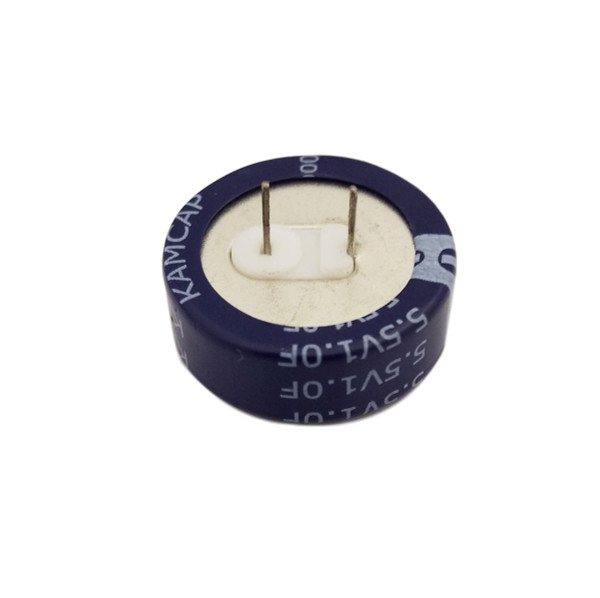 SKU:
SS0017
Availability:
Usually Ships in 1 to 2 Business Days
Bulk Pricing:
Buy in bulk and save

Description
This 1 Farad "Super" Capacitor allows students to study and understand electric potential, capacitance, and energy conversion. Use this capacitor in conjunction with a hand generator for an exciting demonstration of capacitor function and operation. Use it to power an LED for several minutes(make sure you don't forget a resistor) - We sell a kit complete with a super capacitor, breadboard, resistors, clips, wires and LEDs.

Background
Rather than operate as a main battery, supercapacitors are more commonly used as memory backup to bridge short power interruptions. Another application is improving the current handling of a battery. The supercapacitor is placed in parallel to the battery terminal and provides current boost on high load demands. The supercapacitor will also find a ready market for portable fuel cells to enhance peak-load performance. Because of its ability to rapidly charge, large supercapacitors are used for regenerative braking on vehicles. Up to 400 supercapacitors are connected in series to obtain the required energy storage capacity.

The charge time of a supercapacitor is about 10 seconds. The ability to absorb energy is, to a large extent, limited by the size of the charger. The charge characteristics are similar to those of an electrochemical battery. The initial charge is very rapid; the topping charge takes extra time. Provision must be made to limit the current when charging an empty supercapacitor.

In terms of charging method, the supercapacitor resembles the lead-acid battery. Full charge occurs when a set voltage limit is reached. Unlike the electrochemical battery, the supercapacitor does not require a full-charge detection circuit. Supercapacitors take as much energy as needed. When full, they stop accepting charge. There is no danger of overcharge or 'memory'.

The supercapacitor can be recharged and discharged virtually an unlimited number of times. Unlike the electrochemical battery, there is very little wear and tear induced by cycling and age does not affect the supercapacitor much. In normal use, a supercapacitor deteriorates to about 80 percent after 10 years.

The self-discharge of the supercapacitor is substantially higher than that of the electro-chemical battery. Supercapacitors with an organic electrolyte are affected the most. In 30 to 40 days, the capacity decreases from full charge to 50 percent. In comparison, a nickel-based battery discharges about 10 percent during that time.

Supercapacitors are relatively expensive in terms of cost per watt. Some design engineers argue that the money would be better spent in providing a larger battery by adding extra cells. But the supercapacitor and chemical battery are not necessarily in competition. Rather, they enhance one another.

Low impedance - enhances load handling when put in paralleled with a battery.

Simple charge methods - no full-charge detection is needed; no danger of overcharge.

Cells have low voltages - serial connections are needed to obtain higher voltages. Voltage balancing is required if more than three capacitors are connected in series.

High self-discharge - the rate is considerably higher than that of an electrochemical battery.