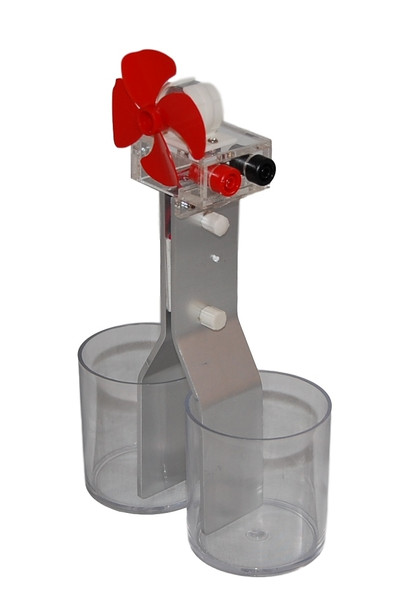 This smart little demo is designed to be immersed in 2-3" of water, each aluminum "leg" being immersed in one of the included plastic cups. Immerse the generator in cups of water of equal temperature, and nothing happens. Immerse the generator in cups of water with a substantial temperature gradient (hot or cold), and the fan will begin to spin after a few minutes. Has 4mm DC input/output terminals and switch to redirect electricity to/from these terminals. The output from these terminals can be hooked up to a meter for measurement, allowing the user to monitor temperature gradient and output data. A DC power supply (up to 6V) can be routed through the 4mm terminals, demonstrating heating on one side and cooling on the other side of the thermocouple. A truly wonderful and facinating device. A must have for those interested in exploring alternative / renewable energy sources. Comes with complete instructions and sample questions for students.

Background
Thermoelectric generators are devices that convert heat energy into electricity. This device utilizes a thermocouple sandwiched between 2 aluminum conductors (the aluminum "legs" you see in the product photo). A thermocouple is formed when two electrical conductors composed of dissimilar materials, come in contact with each other. Thermocouples are able to generate voltages through a process called the thermoelectric effect. The underlying principle behind thermocouples, the thermoelectric effect, was discovered by Thomas Johann Seebec. The thermoelectric effect, sometimes called the Seebec effect, occurs when a thermal gradient is applied to a conductor and produces an Electromotive Force generated across the gradient. The magnitude of the Electromotive Force is a function of the temperature differential applied.


Additional Information
Unlike traditional dynamic heat engines, thermoelectric generators contain no moving parts and are completely silent. Such generators have been used reliably for over 30 years of maintenance-free operation in deep space probes such as the Voyager missions of NASA. Compared to large, traditional heat engines, thermoelectric generators have lower efficiency. But for smallapplications, thermoelectrics can become competitive because they are compact, simple (inexpensive) and scaleable. Thermoelectric systems can be easily designed to operate with small heat sources and small temperature differences. Such small generators could be mass produced for use in automotive waste heat recovery or home co-generation of heat and electricity. Thermoelectrics have even been miniaturized to harvest body heat for powering a wristwatch.