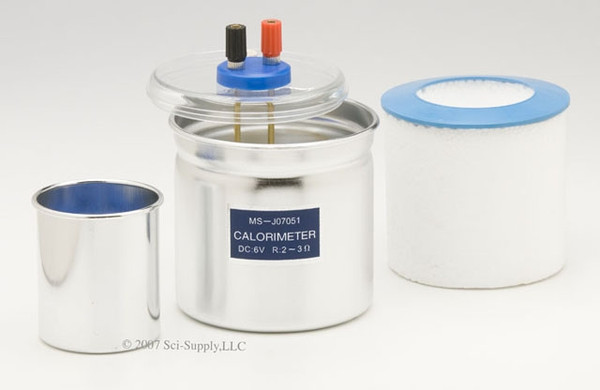 This experiment will determine the mechanical equivalent of heat. It is an electrical version of the classic experiment in which Joule demonstrated that heat is a form of energy which can originate in mechanical form. Joule is given credit for determining the mechanical equivalent of heat. His experiment performed work on a container of water in such a way that all of the work was converted into heat by friction. The temperature of the liquid was measured as work was done on the system, and Joule discovered that the temperature increase was the same as if the same amount of heat had been added to the system. Rather than repeat Joule's effort by converting mechanical energy into heat, this apparatus is designed to test whether the energy of a flowing electrical current causes a similar response. This calorimeter includes: -150 mL aluminum outer can -styrofoam liner and plastic insulator ring -Transparent lid with holes to accommodate the heating element -stirrer -built-in thermometer cork -Removable spring heating element Operates on 0 to 6 V DC. An immersion thermometer, power supply and multimeter to measure your experiments are also suggested (not included). The determination of the number of Joules which are equivalent to one kilocalorie forms the bridge between the old view of heat as a substance and the modern view of heat as energy. The accepted value is MEH = 4186 J / kcal The amount of heat needed to warm a quantity of water is given by Q = mc ÎT where m and c represent the mass of the water in kilograms, and its specific heat in cal/kg-ÂºC, and ÎT is the change in temperature. Electrical energy used in heating a resistance heater is given by W = Pt = (V2/ R) â¢ t where P is power, t is time, V is voltage across the resistor and V is the voltage across it. Equating the two expressions and solving for W/Q gives the Mechanical Equivalent of Heat. MEH = (V2/ R )â¢ t / (mc ÎT)