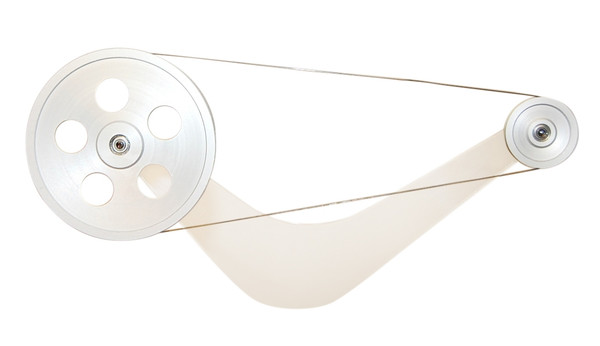 Explore alternative energy with this Nitinol powered engine. Learn how this shape shifting metal may have a great impact on future technologies. General Motors was recently awarded a $2.7 million grant from the US Dept. of Energy to develop a Nitinol engine that will be used to increase vehicle fuel efficiency. This fully assembled Memory Metal Heat Engine demonstrates the conversion of heat energy into mechanical energy. This simple Nitinol Wire Heat Engine is constructed of a boomerang shaped clear acrylic holder with two high quality cast aluminum pulleys. The pulleys feature ball bearing construction for fluid movement. Simply immerse the leading edge of the smaller pulley into an 50 - 90 Degree Celsius water bath, give the larger wheel a gentle spin and watch it fly! These engines will work in either direction. An immersion thermometer is included. Spare wires sold separately (p/n SS3884A). This engine really moves, easily topping 500rpm! Our memory metal heat engine is a fascinating device - don't miss it!

Concept
This ingenious memory metal engine exploits a property of the Nitinol metal alloy that makes it want to return to the shape it was originally formed in when produced. This property of Nitinol alloy is known as the "memory effect". Nitinol wire is produced in straight lengths at a temperature of @600 Degrees Celsius. After it is allowed to cool, it is manually deformed and joined into a closed loop and positioned around the pulleys. When submerged into hot water (@ 80 Degrees C), the Nitinol wire tries to return to its original straight shape. The Nitinol exerts torque on the lower (smaller) wheel as it tries (in vein) to return to its original shape. This torque spins the lower wheel, and more nitinol is drawn into the hot water. The other side of the loop is cooled by the air which momentarily relaxes the wire as it passes around the larger pulley. The process will repeat as long as the water remains warm enough.